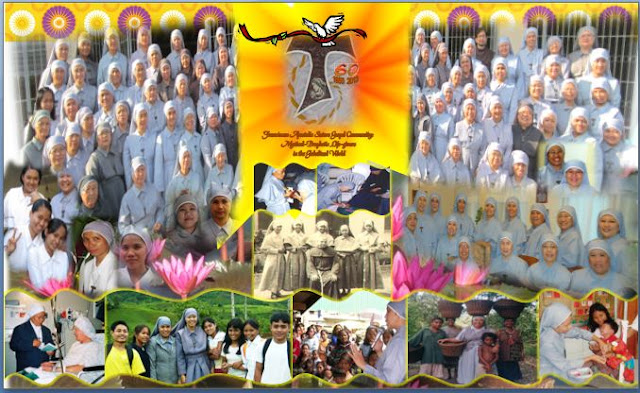 The Franciscan Apostolic Sisters form a religious Institute of pontifical right dedicated to a life of penance, prayer and apostolate in building a gospel community.  The aim of the Institute is to promote the glory of God and the personal sanctification through continuous conversion of its members by living the public vows of chastity, poverty and obedience, according to the Rule and Life of the Brothers and Sisters of the Third Order Regular of Saint Francis of Assisi.


FOUNDING STORY: In 1953, Rev. Father Gerardo Z. Filippetto, OFM, a missionary in the Northeastern region of the Philippines was inspired by the Lord to found an Institute of women as auxiliary to his work of evangelization and preservation of the faith in a vast area deprived of priest.  The members are to live the spirit of Saint Francis of Assisi and follow the examples of the Blessed Virgin Mary in her service to Jesus and the apostles.  For this reason, it is right that the religious family be called the Franciscan Apostol
ic Sisters (FAS). It was founded in the spirit of the Third Order Regular of Saint Francis dedicated to a life of prayer, penance and apostolate. On December 8, 1964, Bishop Teodulfo Domingo, D.D. of the Diocese of Tuguegarao granted its diocesan approval. On May 18, 1996, Archbishop Diosdado A. Talamayan after having received a favorable  consent and approval  from the Congregation for Institutes of  Consecrated Life and Societies of Apostolic Life, issued the Final Decree of its Canonical Erection as a Religious Institute  of Diocesan Right. On March 24, 2003, the Congregation for Institutes of Consecrated Life and Societies of Apostolic Life, after careful examination of this Constitutions and Statutes issued the corrections to be incorporated for this Institute to be presented to the Holy Father for its pontifical recognition granted on MAY 14, 2003.
Posted by FAS Sisters